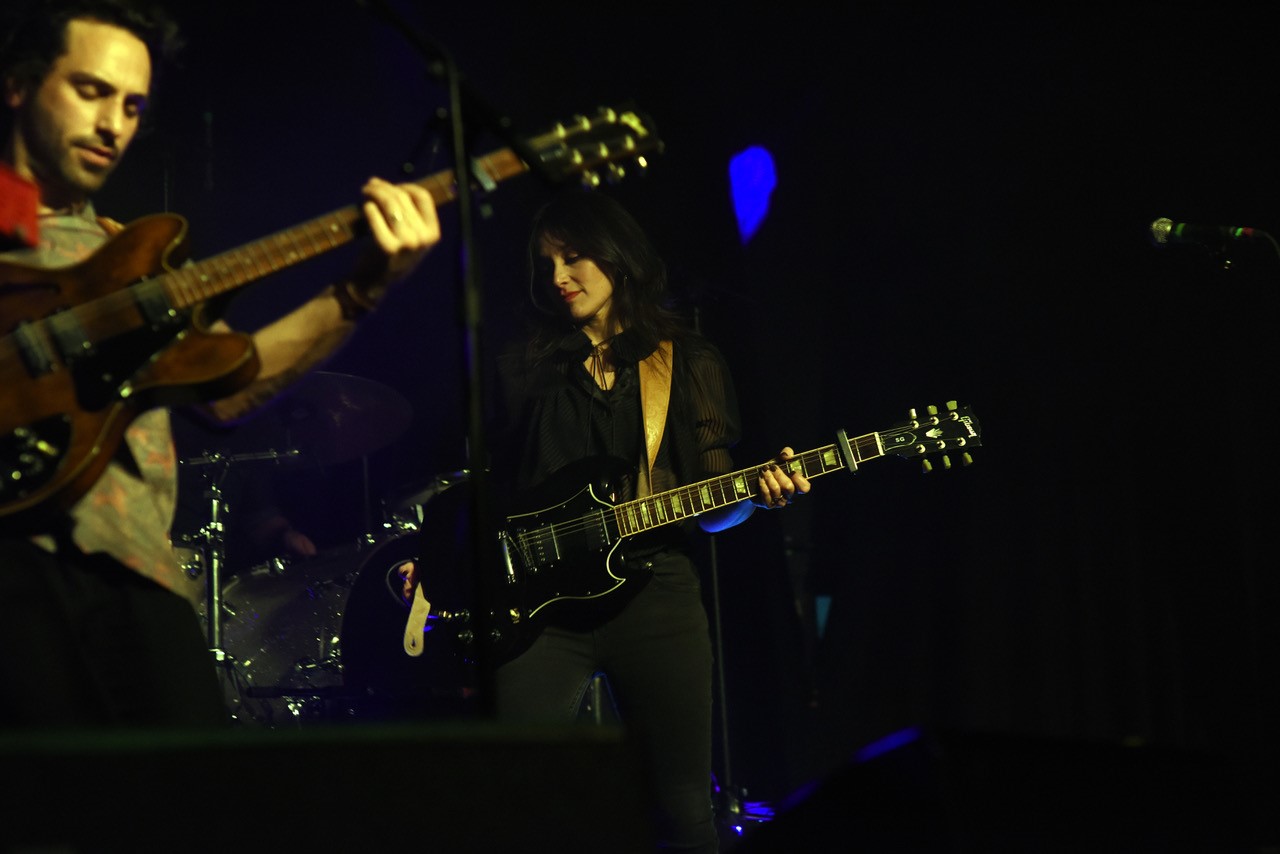 Howling Bells reunite for their first live shows in seven years, playing their 2006 debut album in its entirety.

When they came to London in the early 2000s, Aussie emigrants Howling Bells had one foot in the shimmering waters of shoegaze and another in the dusty desert roads of Americana – or should that be Australiana?

It was the marriage of the two that gave them their charm and their USP in the mid-Noughties, that country twang adding an element absent from the shoegaze tendencies of female-fronted bands like Belly and The Breeders a generation previously, to whom they were often compared.

In truth the Bells were never really a shoegaze band: they didn’t rely on effects pedals and distortion like Slowdive and MBV to amplify the already satisfyingly noisy guitars of the Stein siblings – Juanita and her brother Joel. And their stagecraft is anything but static, even if they do begin tonight’s comeback trip down memory lane standing stationary in the dark beneath criss-crossing beams of white backlighting.

Playing that Bella Union debut album in its entirety, and original order (am I the only one who gets annoyed when bands advertise playing a classic album and then fuck around with the sequencing?), it’s only on the third number, their atmospheric debut single Low Happening, that the lights come up and illuminate the band, all four of them looking unchanged from when we last saw them onstage.

“Seven years!” gasps Juanita, launching into the country swing of Broken Bones, reaching for those high notes before slowing things down for that chorus: “Broken bones may hurt / But a broken heart will never mend.” It’s a reminder of how well Stein does heartbreak, something she explored more deeply in her recent solo career as a country singer, but always tinged with defiance rather than regret.

When Joel steps into the limelight to play a plangent solo on Wishing Stone, we’re reminded that if his sister was the focus of attention he was always the musical star of the show, equally adept with or without a bottleneck on his finger, whether picking out notes or chiming fills, embellishing the songs rather than trying to take them over.

The Night Is Young is a reminder that their debut album was produced by Ken Nelson, fresh from his work with Coldplay’s debut, the slow-build chug and euphoric guitar arpeggios reminiscent of Yellow, and of a time before the band became a watchword for stadium singalongs and self-important pronouncements about the state of the world.

As the set moves into the final third with the shimmering psychedelia of Across The Avenue, we’re reminded that 15 years ago, in contrast to today’s plethora of front-loaded albums aimed at streamers, albums were sequenced sensitively: making an immediate impact at the beginning, slowing the pace in the middle, coming back for a big finish at the end.

Setting Sun, the archetypal example of their slow-build style, perfectly encapsulates the band’s chemistry: Joel’s weeping slide guitar, Glenn Moule’s stop-start drumming and the warm embrace of Gary Daines’s bass, Juanita’s vocal soaring into the chorus with that country catch at the back of the throat. It’s ecstatic, almost transcendental.

The set, like the album, builds to a close with the two Steins exchanging vocal lines on In The Woods, again built around sublime guitar melodies, and finally with I’m Not Afraid, written by their father Peter, himself a great guitarist and songwriter.

It’s a song of resilience in the face of adversity, somehow summing up the Southern Gothic thread identified in the Bells by Amy Britton in her album reappraisal last year, as well as a fitting postscript for the past few years we’ve been through:

Cities Burning Down
Nightingale
Into The Chaos