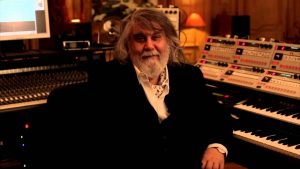 Five or six years ago I went to Paris to speak to Vangelis for a CD booklet I had been commissioned to write. It was a memorable experience.

I went to his apartment, which was one of those ones you only get in France where you enter a building through a little door on the street, then past a concierge and through a courtyard.

A lift took me up to another door that opened into an enormous apartment all on one floor, spread along what must have been the equivalent of four or five houses.

It was extravagantly furnished in gaudy antiques, hideous scultures and terrible paintings, which he had painted himself as I recall, with a music studio in one of the rooms.

He was enormous, and immobile, and he sat in a throne-like chair holding court like an oriental potentate in centuries gone by. At one point a Filipina maid brought a platter of ham sandwiches (sliced white bread from a packet) and crisps for our lunch.

He must have weighed at least 25 stone (probably much more) and after a while the maid had to summon another servant to help him out of his seat and they both walked him very slowly and unsteadily to the loo – a mission that took almost as long as the Rosetta one to Mars that I was there to talk about.

He exhibited little enthusiasm for the promoting his soundtrack album commemorating the European Space Agency’s mission. Which was a shame, as I had spoken already to people from the ESA, who were thrilled to have an Oscar-winning composer on board.

When I asked about his interest in space exploration, he waved his hands and said he had always been interested in space “ever since I was a child”.

Vague on specifics, he rambled on about music being “the sacred force of the universe which transforms chaos to harmony” but I couldn’t draw out any detail about the Mars mission.

To make matters worse, when I asked how he had gone about creating his soundtrack for the mission, he told me he recorded music every day for his own pleasure and had simply presented the record company with one of these random recordings.

This made it difficult to write a compelling narrative for the sleeve notes, in which I had hoped to describe in lyrical detail his fascination with space exploration and subsequent inspiration for the album.

To make matters even worse, my end of the job was inexplicably overseen by a young woman from the record company who had just been promoted from her previous role as an intern.

First she broke the golden rule of PR by sending my draft notes to the artist himself, whose ‘edit’ was so incomprehensible, and in such mangled English (Vangelis’s first language is Greek), that I found it hard to follow at all.

Then, when I used all my creative writing powers to concoct a moving story of how he had composed his poignant elegy for the space module, which had been laid to rest on Mars at the end of its 12-year mission, she sent it back with her own corrections.

First she told me I couldn’t use the word ‘elegy’ because she had looked it up and it meant someone had died. I responded by trying to explain that it was a “metaphor” but I think she had to look that up too because she insisted that I still had to change it.

Finally, she ‘corrected’ my pay-off line of “Mission accomplished” – a phrase well-known to any of us who have ever watched anything at all to do with space – to the less familiar and frankly unwieldy “Mission will have been accomplished.”